Quickie Recap 1.3: Take nothing for granted in the Big East, Wake still perfect 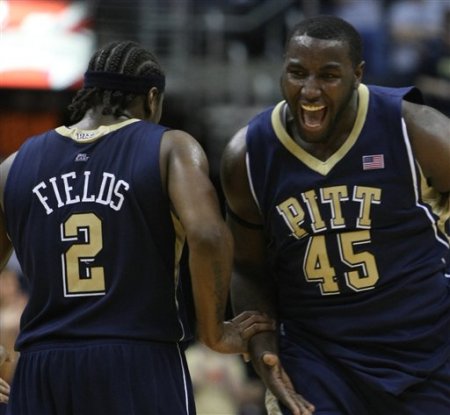 A lot of love in Pittsburgh, maybe too much

Georgetown received a giant reality check on Saturday afternoon, or maybe it was just the reality of how vicious the Big East will be this year.  After going to Storrs and knocking off the #2 Huskies earlier in the week, they were rewarded with a match-up against the undefeated and energized Pittsburgh Panthers.  The Hoyas kept it close in the first half, with DeJuan Summers putting the team on his back.  However, the depth and toughness of the Panthers was too much for the Hoyas.  Tied at 40 with just under 15 minutes to go in the game, Pittsburgh outscored the Hoyas (turned puppies) 30 – 14 down the stretch in order to prevail 70 – 54.  DeJuan Blair may only be 6’7″ but he may be the second coming of “The Round Mound of Rebound.”  Blair finished with 20 points and 17 rebounds and the Panthers out rebounded the Hoyas 46-21.  Levance Fields dished out 8 assists with zero turnovers, improving his assist to turnover ratio to 4.8 : 1.  The 16 point loss was the Hoya’s worst home loss since 2004.

Moving up I-95 a few hundred miles, there is a little something to jam about today in Jamaica, New York.  The St. John’s Red Storm created a lot of havoc for a sharp shooting Notre Dame team, in order to get a major upset 71 – 65.  Notre Dame came into Saturday’s game averaging slightly under 10 three balls a game.  The Fightin’ Irish were not able to weather the Red Storm’s tenacious defense that only allowed the Irish to hit on 4 of their 17 three point attempts.  DJ Kennedy aided on the offensive end with 20 points, he also collected 10 boards.  Luke Harangody still “got his” in the form of 28 points and 14 rebounds.  This is a bad loss for the Irish, who can’t afford to drop ones to the bottom feeders of the brutal Big East.

Wake Forest took their unblemished record to the Land of Latter Day Saints and were able to keep it perfect in downing the BYU Cougars 94 – 87.  The loss ended a 53 game home win streak for the Cougars.  In an ESPN recap it was stated, “Wake Forest had to rally from an eight-point deficit in the second half and an entire game of deafening taunts and chants from the home fans, who were loud and rowdy throughout the night.” Wrap your head around that.  Mormons = sober, we’re awfully confused.  Jeff Teague led the Demon Deacons with 30 points and James Johnson helped with 22 points and 15 rebounds.  BYU was led by Jimmer Fredette’s 23 points and 9 rebounds, a majority coming from his first half performance.  We’re guessing BYU will not be inviting anymore Demon Deacons into their church gym anytime soon.  Wake now has a full week off before inviting the #1 UNC Tar Heels down Tobacco Road. 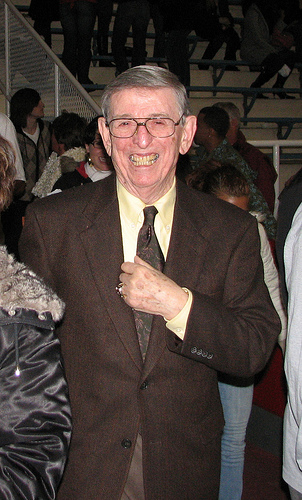 We’re all about reminiscing here are SFBE, so this article is right in our wheelhouse.

Despite being mediocre and predictable, Seth Davis is a decent columnist and his feature on what a bleak decade it’s been for the Red Storm program is spot on.

Nobody can really put their finger on a single glaring issue causing the Catholic school in Queens to fall off the map, nor can they determine why countless area players who grew up honing their skills in NYC neighborhoods are lured away from the largest market in the country to play elsewhere (or Pittsburgh).

There’s certainly things out of the athletic department’s control — lack of on-campus dormitories, lack of a true pipeline from the city’s high school and AAU scene, and heck, lack of a prominent coach.

But there’s still the history and people like Looie Carnesecca, although he’s taken on more of a folk hero role now at the age of 83. We’re guessing less and less high school seniors even know who he or even Chris Mullin are, let alone care about their accomplishments.

From bad to much worse at St. Johns

There will be no high flying action from Mason Jr. this season

We’re aware that St. Johns hasn’t really been a significant piece of the college basketball landscape in a while; not since Ron Artest and Erik Barkley led them to the Elite Eight in 1999. And while this year the Red Storm certainly were once again going to be no more than a Big East doormat, they’re really are up against the wall right now.

The team lost Anthony Mason Jr. today. He needs a foot operation, which will sideline him for the season. He’s unquestionably their best player, and yes, is the son of former NBA forward Anthony Mason. We’re guessing you already knew that, but just wanted a reason to perform a Google image search on Anthony Mason and look at some of those crazy phrases buzzed on his head.

NY Daily News’ Roger Rubin reports that Mason Jr. is tough–he played through the pain for two games against Cornell and Boston College, and managed to average 18 points. He also notes that Mason Jr. will apply for an additional year of eligibility.

Anyways, considering the heavy loss comes to a bad team playing in the arguably the deepest conference we’ve ever seen in a single season, it looks like this team could acquire the label of “historically bad” before the season is over.