If you ain’t a Gator, you’re Gator Bait

Play Music: I will Always Love You~ Whitney Houston

The Florida Gators are the National Champions.  BAAAAAAAH! Dah Na Na Na Na, Go GATORS!  Yes, we got sick of hearing that band all night long but we must give the Florida Gators their props.  The Gators SEC defense proved to be too tough for the prolific Big 12 offense of Oklahoma, taking home the Sears Trophy with a 24 – 14 victory.  The winners exuded confidence from the start, as Urban Meyer paced the sideline with a stoic look, all while Bob Stoops looked like he forgot 100,000 people were going to be in the stadium.

This game was one of the better BCS Championships in recent memory despite being falsely advertised as a shootout style game, of which the over-under hovered around 70.  Heisman QB’s, Bradford and Tebow each threw 2 first half picks despite only throwing a combined 8 all year long and  Oklahoma was held to 14 points after averaging 63 a clip during the regular season.

Tim Tebow shrugged off two first half interceptions, and willed his team to victory, finishing with 231 passing yards, Two TD’s.  Oh not to mention the 109 yards he reeled off on the ground.  Percy Harvin, solidified his draft status with 122 rushing yards on only 9 carries. Oklahoma could have changed the landscape of this game in the first half but a couple of second quarter goal line stands by the Gator defense, left an open stage for Tebow, and of course he capitalized.  We should have known Tebow would deliver, after essentially guaranteeing that the Gators would not be stopped for the remainder of the season.  Will power.

We know Tebow and his Gators receive a lot of “pub” and most often times to a nauseating extent but when it is all said and done, Tim Tebow might be one of, it not, THE greatest college football player of all time, as his personal destiny has manifested itself right before the country’s eyes.

We will be looking forward to next year when Tebow will likely return for his Senior season.  We also may get a chance to see Bradford come back as well, due to his sub-par performance on the biggest stage.  If that happens, expect next year’s preseason rankings to have Florida on top of the list followed by Oklahoma.

Quickie Recap 12.6: No Percy no problem, Big 10 earns some respect

Rulers of the South

Oh what a dreary day to be a ‘Bama fan; a waste of a resurgent season, in our opinion. Granted they exceeded expectations, but this is where college football becomes irritating, We’re glad we have no deeply rooted allegiances and can instead crush Bud heavies every Saturday, all while watching 118 programs slowly widdle away like a slug doused with salt.

In the other quasi-semifinal, Bob Stoops continues to proves he’s the biggest bully in college football by putting up 60+ points for the fifth consecutive game. It was over before it started and to us, Chase Daniels looked disinterested.

So it’s most likely going to be the Sooners vs. Gators for in the BCS Championship Game. Start your fact checking now Mr. Thom Brennaman.

In roundball, the Big 10 may have gained some respect with two upset victories…

Meeeechigan’s Deshawn Sims had his shining moment, leading all with 28 in a win over the Dukies, who played like absolute sissies. Coach K’s boys didn’t get to the free throw line even once in the first half, and shot 2-18 behind the new arc. The Wolverines now have two signature wins (UCLA) to hang their hat on come March.

No football left in South Bend? No problem! There’s still reason to be pissed off…as the Buckeyes take down the Irish in Indy. Luke Harangody is back and looking healthy, but the story here is Ohio State’s Evan Turner. He also led all scorers with 28, and has basically emegred as the team’s go-to-guy.

One final game of note, attention-seeking Marquette protects their house, with a win over identity-seeking Wisconsin. Both of these teams have talent but right now aren’t really getting any chatter, especially from us.

While Syracuse – Florida was a good measuring stick game, showing the Orange are definitely a top 20 team, it lacked drama and excitement. Dickie V seemed like he drank 5 “Sparks” but was the only one drunk at the party. Syracuse did their part in building that “Tournament Resume,” with one of those marquee wins that Joe Lunardi talks up in March. The ‘Cuse received help from everyone in a 51% shooting effort, led by the linebacker/tight end Paul Harris’ 18 points and 11 rebounds, and Andy Rautins’ five first half triples. 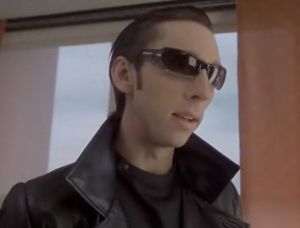 Florida was led by none other than Nick Calathes (See Post from 11.24), Billy Donovan’s “Golden Boy.” Excellent set shot!

Today while you’re at work, there’s 2nd round matchups in Maui you have good reason to look forward to…

One more thing on the CBE Classic, where the Kansas – Washington game felt over hyped. Why is ESPN all of a sudden making a big deal over Jon Brockman??? The guy is talented yes, but, he’s a 4 year starter who has been visible on the college basketball scene since his freshman year. Maybe we’re missing something here but he didn’t just arrive, we already knew he was decent. Kansas will now play Syracuse for this prestigious title.

Down in the Virgin Islands, UCONN beat Wisconsin to capture the Paradise Jam title. Could these teams be any different? UCONN reminds us of cool kids who party (and steal computers, HAHA) while the Badgers play by the rules and listen to their parents–who in this case is Bo Ryan. Yes, we know Madison is like some crazy party school, full of liberal, free spirits who don’t follow conventions, but this is strictly basketball talk so don’t get it twisted. Regardless, UCONN certainly silenced some haters this weekend and, in our opinion, have solidified themselves as the second best team in the country. 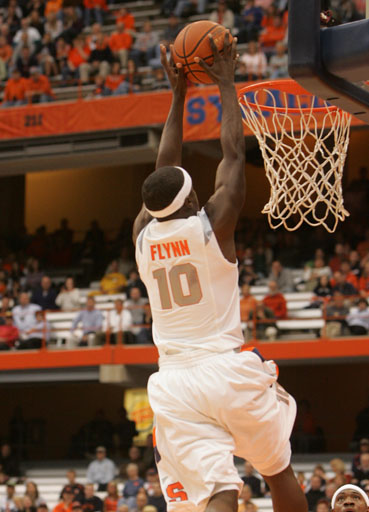 Can the 6 foot Flynn fly over the Gators?

After a slow weekend of college basketball, we can only be excited for what lies ahead; the Maui Invitational, the Old Spice Classic and the O’Reilly Auto Parts College Basketball Experience (No, we’re not joking, that is the name). So, between overweight Samoan women dancing in grass skirt’s, the over exaggeration of how “manly” a particular deodorant stick is, and Irish car parts – All fitting Basketball Tournament Sponsors, eh? – Almost sounds like the that should be followed by, “All this can be your’s if the Price is Right…” Anyway, tonight’s best bet comes from the car parts classic in Kansas City, Missouri (couldn’t they pick a more Irish city?).

Jimmy Boeheim’s Syracuse Orange will meet the #19 Florida Gator’s in the first of two semifinals of the College Basketball Experience. The victor will face the winner of the nightcap, Kansas vs. Washington. Expect points, and a lot of them. Both team’s come into tonight’s game undefeated, with the ‘Cuse posting over 82 points a clip and the Gator’s pouring in 75 per showing. For Florida, everything is run through Nick Calathes, filling the stat sheet and leading the team in all major categories (points, rebounds, assists and steals). The Orange will be lead by Sophomore PG and dark horse for “First Team All American,” Jonny Flynn.

MNF: I thought the Saint’s were doing their part with the United Way, cleaning up New Orleans in the wake of Katrina, but wait…oh yeah…they are just selfish, whiny, spoiled professional athletes. Saint’s host the Green Bay Packers on Monday Night Football, 8:30 pm on ESPN. (I really just had to find a way to put this article on the blog, it’s my job).