Who Is Billy Edelin?

Edelin’s short lived stay on the college basketball scene was really a precursor to what was to come. He had to sit out the first 12 games of his freshman season for rape allegations, which for the record were later dropped. From there, Edelin jumped on the “Melo Express” and looked to take lead of the team in 2004 and fill the 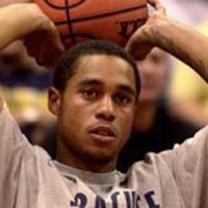 void left by the freshman phenom. Instead he went into a downward spiral and the details as to why are anyones guess. Naturally, speculation abounded as to just what the hell Billy Edelin was doing with his life, and why Jim Boeheim and Co. left so few privy to the truth.

The end for Edelin came in February of his sophomore season. He was the starting point guard putting up a productive 14 / 5 / 4, but then he left the team for the classic sports injury explanation— “undisclosed personal reasons.”

What Edelin is doing, where he is, or the circles he runs with are generally unknown. His wikipedia entry says his most recent basketball stint was in 2006 as a member of the Great Falls Explorers and he had actually declared himself for the 2007 NBA Draft.

So while we may never know just what happened to Mr. Edelin, maybe we can revere him and turn him into some sort of cult hero. But instead we won’t, and will just use him as a clever blog title aimed at providing you college basketball commentary with a heavy dose of cynicism. We’re new to the whole blog thing, and are taking a stab at it now that we’re in the real, Real World.

Expect the blog to be sprinkled with some college football, and other topics we feel is necessary to rant about.

2 Responses to Who Is Billy Edelin?